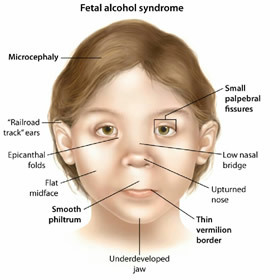 Fetal alcohol spectrum disorders (FASDs) are a group of conditions that can occur in a person whose mother drank alcohol during pregnancy. Problems may include an abnormal appearance, short height, low body weight, small head size, poor coordination, low intelligence, behavior problems, and problems with hearing or seeing. Those affected are more likely to have trouble in school, legal problems, participate in high-risk behaviors, and have trouble with alcohol or other drugs. The most severe form of the condition is known as fetal alcohol syndrome (FAS).

FASDs are caused by a woman drinking alcohol during pregnancy. Alcohol in the mother’s blood passes to the baby through the umbilical cord. When a woman drinks alcohol, so does her baby.
There is no known safe amount of alcohol during pregnancy or when trying to get pregnant. There is also no safe time to drink during pregnancy. Alcohol can cause problems for a developing baby throughout pregnancy, including before a woman knows she’s pregnant. All types of alcohol are equally harmful, including all wines and beer.
To prevent FASDs, a woman should not drink alcohol while she is pregnant, or when she might get pregnant. This is because a woman could get pregnant and not know for up to 4 to 6 weeks. In the United States, nearly half of pregnancies are unplanned.

The primary disabilities of FASD are those that most directly reflect the underlying central nervous system damage caused by prenatal exposure to alcohol. This damage manifests in a range of difficulties with adaptive behaviour, attention, cognition, executive functioning and memory. As a result, individuals with FASD may have trouble with abstract reasoning, organization, planning, understanding or recalling a sequence of events, connecting cause and effect relationships, and/or regulating their own behaviours and emotions.
Typical brain-based, primary disabilities of FASD include:
• inconsistent memory and recall
• inability to filter out environmental or emotional distractions and sensory stimuli
• slow and inconsistent cognitive and auditory processing
• decreased mental stamina
• difficulty interpreting and applying abstract concepts (for example, managing money and time)
• impulsivity and poor judgment
• inability to predict outcomes (of their own or others’ actions)
• difficulty shifting from one context to another
• resistant to change
• inability to see another person’s perspective
• inability to recognize indirect social cues.

The constellation of medical, surgical, behavioral, educational, custodial, judicial, and other services required to care for an individual with FASD results in a large economic burden to the individual, the family, and society. In the 1980s, the estimated annual FAS-related expenses for the United States increased from $75 million to $4 billion, with the lifetime cost of care approaching $1.4 million. Cost estimates are similarly high in Canada but also vary widely depending on the methodologies used. During 2005, children with FAS incurred average medical expenditures 9 times higher than those without FAS. When FAS with intellectual disability was considered in making these calculations, average expenditures increased an additional 2.8 times the costs for FAS alone. Because FAS is only 1 subset of FASD, the true economic effect of FASD is much larger. It has been documented in Canada that an FASD evaluation requires 32 to 47 hours for 1 individual to be screened, referred, evaluated, and given the diagnosis of an FASD, resulting in a total cost of $3110 to $4570 per person. On the basis of the cost of a comprehensive multidisciplinary FASD assessment in Canada, the total cost estimate of all FASD screening and diagnosis ranges from $3.6 to $7.3 million per year, excluding treatment costs. The estimated lifetime cost of care, including social and health care services, for each child born with FASD is up to $2.44 million. The calculated expense of raising a child with FASD is 30 times the cost of preventing the FASD. In 2005, the annual Medicaid cost to care for a child with FASD was 9 times that of a child without FASD.