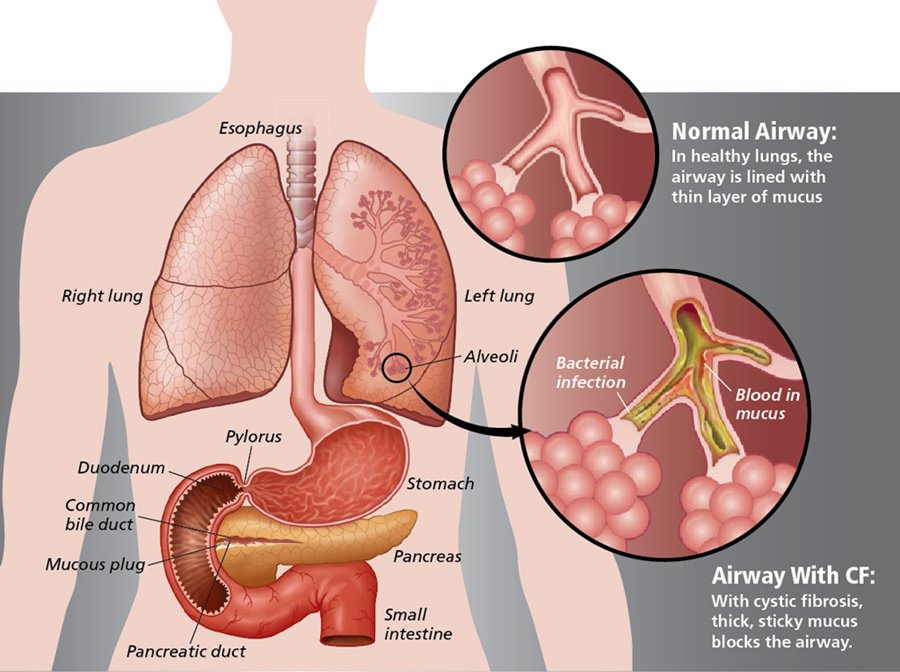 Cystic fibrosis is a progressive, genetic disease that causes persistent lung infections and limits the ability to breathe over time.

It  is an inherited disease characterized by the buildup of thick, sticky mucus that can damage many of the body’s organs. The disorder’s most common signs and symptoms include progressive damage to the respiratory system and chronic digestive system problems. The features of the disorder and their severity varies among affected individuals.

The most commonly affected organs include the:

The symptoms of cystic fibrosis can vary depending on the person and the severity of the condition. The age at which symptoms develop can also differ. Symptoms may appear at infancy, but for other children, symptoms may not begin until after puberty or even later in life. As time passes, the symptoms associated with the disease may get better or worse.

One of the first signs of cystic fibrosis is a strong salty taste to the skin. Parents of children with cystic fibrosis have mentioned tasting this saltiness when kissing their children.

The thick and sticky mucus associated with cystic fibrosis clogs the tubes that carry air in and out of your lungs. This can cause signs and symptoms such as:

The abnormal mucus can also plug up the channels that carry the enzymes produced by the pancreas to the small intestine. Without these digestive enzymes, the intestine can’t absorb the necessary nutrients from food. This can result in:

In cystic fibrosis, a defect (mutation) in a gene changes a protein that regulates the movement of salt in and out of cells. The result is thick, sticky mucus in the respiratory, digestive and reproductive systems, as well as increased salt in sweat.

Children need to inherit one copy of the gene from each parent in order to have the disease. If children inherit only one copy, they won’t develop cystic fibrosis. However, they will be carriers and possibly pass the gene to their own children.

Cystic fibrosis is most common among Caucasians of Northern European descent. However, it’s known to occur in all ethnic groups.

People who have a family history of cystic fibrosis are also at an increased risk because it’s an inherited disorder.

Although women with cystic fibrosis may be less fertile than other women, it’s possible for them to conceive and to have successful pregnancies. Still, pregnancy can worsen the signs and symptoms of cystic fibrosis, so be sure to discuss the possible risks with your doctor.

Although there’s no cure for cystic fibrosis, there are various treatments available that may help relieve symptoms and reduce the risk of complications.

Chest therapy helps loosen the thick mucus in the lungs, making it easier to cough it up. It’s typically performed one to four times per day. A common technique involves placing the head over the edge of a bed and clapping with cupped hands along the sides of the chest. Mechanical devices may also be used to clear mucus. These include:

a chest clapper, which imitates the effects of clapping with cupped hands along the sides of the chest

an inflatable vest, which vibrates at a high frequency to help remove chest mucus

Cystic fibrosis can prevent the intestines from absorbing necessary nutrients from food. If you have cystic fibrosis, you might need up to 50 percent more calories per day than people who don’t the disease. You may also need to take pancreatic enzyme capsules with every meal. Your doctor may also recommend antacids, multivitamins, and a diet high in fiber and salt.

If you have cystic fibrosis, you should do the following: